Atmosphere: A story of the third West Norwood Feast 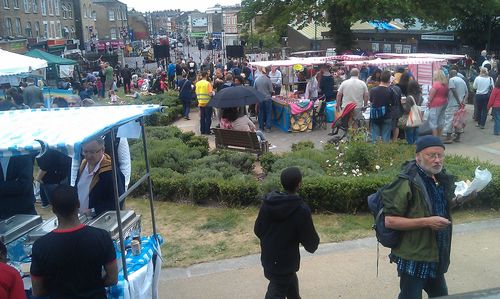 There’s a strange thing about atmosphere. One moment it’s not there, and the next it is.

Just before one o’clock on Sunday lunchtime, nearly three hours into our third Feast, there was still a sense of nervousness around our information stall. The weather had taken a sudden turn for the grey that morning, and the visitors were slow to arrive. Then there was a brief shower, which saw people take refuge inside St Luke’s church. (They had to send out to get extra milk, they were serving so many cups of tea – so that was a silver lining.)

And then, around six minutes past one, something happened. First, the boys from the Nueva Generacion capoeira group started warming up on their drums. Next, three friends who had just bought Ain’t No Picnic burgers decided that the grass had dried off enough to sit on. Then a man with a bubble wand started making giant bubbles: I saw one drift up to the height of the church portico. And suddenly, there it was, like reentering the earth’s orbit – we had atmosphere!

From the early days of Space Makers, when we were working at Brixton Village, I’ve been fascinated by this threshold. The closest I’ve come to a definition is that it’s the moment when people forget to worry whether they’re going to have a good time, whether an event is going to be a success, whether they should have gone somewhere else. It’s a subtle shift, and a complete transformation. As soon as it happens, a space changes: it feels like somewhere you’re meant to be.

More people sat down, there was capoeira, comedy, trombones, flamenco – and despite the rain, West Norwood showed its stamina. It was another successful day. The spirit of it is captured in a lovely post by Laura Billings, who visited us and then went on to another Big Lunch street party at the other end of the borough:

What both of these events had done successfully is string together islands of people and activity. They stopped the streets feeling like a thoroughfare you would rush along with your head down, and gave them a new purpose. An end in themselves, not just a means to another destination. And despite getting utterly soaked in the downpour, there was a very warm welcome.

So what I’m wondering is, how do we spread the word further, so that we can share that warmth with even more people in and around West Norwood next month – and bring that magic of atmosphere to the whole town centre?