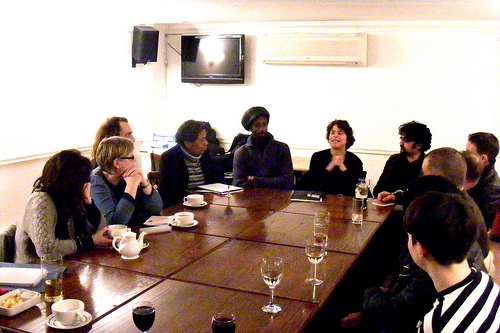 Well, that was January – and it’s been an intense few weeks, as the West Norwood Feast starts to gather momentum. What has driven that momentum, above all, is the energy of those of you who have been coming to our Tuesday night open meetings.

Please note: this week’s meeting (Feb 1st) has moved to The Railway pub by Tulse Hill station – apologies for the very short notice, this was due to the unexpected closure of The Corner.

We’ve also heard from a lot of people who are keen to get involved, but can’t make it along on Tuesdays – so this post is by way of an update on what’s happened so far, and how you’ll be able to get involved as things develop.

We started this project with the idea of four marketplace hubs within a short walking distance of each other along Norwood Road and Knights Hill. People have responded really enthusiastically to this idea – as well as making some modifications to our original idea of what the four hubs should be.

There are now working groups led by local people focusing on each of these – and we’ll soon be adding the descriptions they have come up with for their hubs to the site, along with contact details for the group. For now, here’s an outline:

This was a slight shift from the original plans, as people felt that the Food Fair and Farmer’s Corner hubs could be combined into a single food site, with the addition of the flowers and gardening hub as something that there was demand for locally.

Other parts of the project

In addition to the four hubs, there has been a lot of interest in organising pop-up activities in other spaces and venues around West Norwood on market days. Several people have come forward who are interested in taking a lead on bringing out the amount of musical and theatrical talent and experience that’s represented within the area – and there will be a Performance working group starting up in the next few weeks. We think this is a really vital part of the project. If it works, it should feel like this isn’t just a new street market, but a kind of festival that joins together the whole of the town centre once a month.

The other working group that’s well under way is the Engagement group – who are looking at ways of spreading the word, talking to people and getting them involved with the West Norwood Feast. Charlotte, Kirsty and Lucy have all been out talking to local shops and businesses, answering people’s questions and adding listings for them to our map of what’s going on in West Norwood – check out their blog post.

There was a lot of discussion in the first couple of weeks about whether the market should be on a Saturday or a Sunday. There were arguments on both sides – but the group felt that the advantages of Sunday were stronger – particularly in terms of parking, but also less competition with existing markets, with more likelihood of local people staying in West Norwood and coming to something on their doorstep.

So we’re now aiming for the first market day to happen on Sunday 3rd April!

We’ll also organise a launch event a few weeks before that – to tell as many local people as possible about what’s going to be happening.

We’ll be continuing to host Tuesday night meetings over the weeks ahead. Unfortunately, our meeting venue at The Corner is no longer available, so the meetings are feeling a bit more nomadic than we would have hoped! We’re very grateful to The Railway for stepping in at short notice this week – and we’ll confirm very soon where we’ll be meeting from the 8th Feb onwards.

Trevor Virtue from the council’s markets team came down to last week’s meeting and was very positive about the plans so far. We’re working with him and his colleagues to arrange the licensing for market days and to explore the best option for hiring stalls. We’re also looking into options for setting up a community company to run the market in the long-term – if this is something you’d be interested in being involved with, please contact Mitchell at westnorwood@westnorwoodfeast.comspacemakers.org.uk.

The working groups will soon be moving into recruiting potential traders for each of the marketplace hubs – and we’ll set up dedicated email address for each hub, so that people interested in having a stall can contact them directly.

There are plenty of other things to do – and there’s plenty of room for more ideas – so please come and join us one Tuesday. Or, if you can’t do that, sign up to the mailing list and we’ll let you know more very soon about other ways of getting involved.