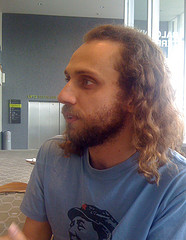 Hello from myself and the rest of the Space Makers team – and thank you for the welcome we’ve already had from people in West Norwood. We look forward to meeting many more of you over the next few months and creating something exciting together.

For now, I wanted to tell you a bit about where Space Makers came from and how we found ourselves in West Norwood.

Space Makers started as a monthly meetup I was organising in London in early 2009 for anyone interested in rethinking the spaces where we live, work and play. Before moving to London, I’d been a local radio journalist and a community activist in Sheffield, in the middle of the Cultural Industries Quarter – an area of the city which grew out of artists and musicians taking over ex-industrial buildings. Those experiences inspired me with the possibilities when people come together with a desire to make things happen and a willingness to substitute imagination for money.

After a few years in London, it seemed like there was a pattern emerging of new ways of using space – co-working offices where freelancers and startups huddled for warmth, artists and theatre projects taking over warehouses or unused carparks, people organising gigs or underground restaurants in their front rooms. The old boundaries between the home, the workplace and the “third place” (the pub or coffee shop) seemed to be breaking down – and as the recession created hard times and empty shops on the high street, maybe it was also opening up possibilities for other, more sociable ways of making these unused spaces work.

All sorts of people started coming to our Space Makers meetups – artists, activists, architects, policy-makers, squatters – and sharing ideas about how to make spaces in which people want to spend time. When we put up a website, the Space Makers Network, hundreds of people around the country got involved in using it to share information, ask questions and tell each other about their projects. Then we started getting approaches from local councils and property owners – and we created Space Makers Agency so we could work with them on hands-on projects.

Our first big project was at Brixton Village indoor market. If we’d known how big and complex it would be, I’m not sure we’d have had the courage! But out of all the chaos and the challenges of working with a big commercial landlord and in a situation with a complex and difficult recent history, something special happened. Hundreds of people got involved in creating pop-up spaces, new local businesses and a rolling festival of weekend events that meant there was always something surprising going on when you visited the market – and thousands of new visitors came to be part of it.

The Brixton project was funded by the market’s owners, but it wouldn’t have happened without Lambeth council, who first introduced us to the owners and worked closely with us throughout the year that we were there. Lambeth were keen to bring a similar energy to other town centres around the borough, while recognising the different histories and contexts from one area to another – and when they asked for proposals for high street projects, we submitted an idea for West Norwood.

Initially, the council were keen for us to focus on empty shops, in the same way we had in Brixton – but it soon became clear that the complex mixture of ownership of West Norwood’s empty shops presented a more difficult situation than Brixton, where we were dealing with a single landlord responsible for the whole of Market Row and Granville Arcade.

Instead, we came back with an idea based on a project we had worked on with RIBA London, to make better use of the city’s “forgotten spaces”. We identified a series of sites around Norwood Road and Knights Hill which could be brought into use one day a month to create a new open air street market – with a mixture of marketplace hubs, drawing people around the town centre, combined with pop-up performances and events in shops and venues around the route.

That was the starting point for the West Norwood Feast. We’re convinced there’s the opportunity to do something which brings life to the town centre and benefits existing businesses and the local community.

To make that work, it needs to be long-term – and it needs to be done in collaboration with as wide a range of people as possible within the area. We’re not experts coming in to transform everything. We have learned some things about how to build energy and excitement around a project and make it happen – but the real experts, the people who will lead this and make it a success, are the people who know West Norwood best.

This site is a step towards making the West Norwood Feast happen – and a chance to celebrate the people and stories of this part of south London.

So please join in, add your voice to the conversations, tell us a bit about who you are, why West Norwood matters to you and what you’d like to see happening here over the months ahead.

Help us spread the word and make this happen!