What’s a market without bunting? 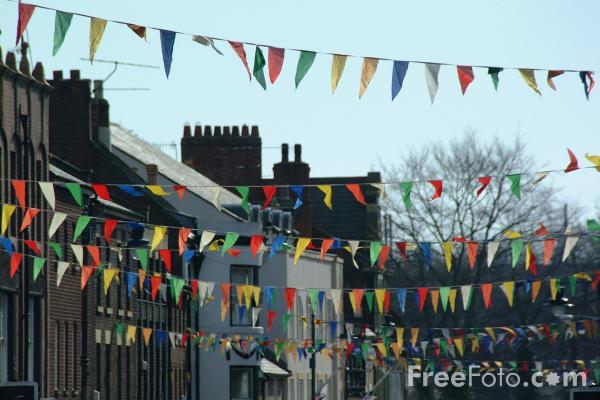 Well tickle me sideways. Ask, and ye shall receive! As we prepare the final touches for Sunday we’ve started to send out some simple requests. One, which went along the lines of:

“We all know it wouldn’t be a market without bunting right? If you have any (any, whatsoever) please share it with us!”

I’ve had it fixed in my head that bunting must be sought for market day.

We’ve had some great responses to the call out and I was reminded of a Yiddish folktale in a book that I had purchased in one of West Norwood’s fine charity shops some time ago.

There was once a poor and elderly rabbi who lived in Warsaw. Lonely and embittered with life’s misfortunes, the old rabbi would often dream. Over time he realised that he was having the same dream, again and again. The place in his dream was strangely familiar to him, but he couldn’t quite figure out how so. A few details did stick out and stay with him during his waking hours.

And increasingly so. He could see a wide river, a bridge and under that bridge a door. Every now and then images from his dream would return to him and one day very suddenly he convinced himself that behind that door lay a huge pot of gold.

The dream, now growing stronger, was as if some inviolable force was tugging at him. The only thing he knew was that it was in Krakow as the bridge and river were familiar from his childhood. So determined was the poor old rabbi that he decided against his better judgement to travel the long distance and find this gold. He arrived in Krokow and found the place he was looking for. On arrival he discovered that there was a burly and unwelcoming looking man sat by the door’s entrance. He thought how best to approach him. After a while, and with little in the way of a plan, he asked the man outright if he could see what was behind the door. The man refused. The rabbi then thought why not tell the man that there’s gold behind the door and that if they could both get it open he’d share the bounty with him. The burly man gave out a hearty laugh. “Ha! Old man there’s nothing behind the door other than empty wine barrels.” He continued, “Funny though, as I’ve been having this strange dream about a pot of gold behind an old rabbi’s cooking stove & he looks very much like you! Hahaha!”

Dejected and heavy-hearted the old rabbi returned on his long journey home. As destitute and poor as ever, the dreams he once had began to fade. It was some months later that he remembered what the burly man had told him when waking up one morning.

He rushed to his cooking stove and with great effort managed to inch it away from the wall bit by bit. Lo and behold there, sat in a hole in the wall, was a pot of gold.

Well, congratulations if you’re still reading. I think the idea is that the treasure is often right in front of you if you know where (and how) to look…

I know I may have laboured the point but I’m really excited about Sunday and really keen on seeing the wealth and talent that is being drawn from the area.