Insider’s guide to… The Clockworks

In Nettlefold Place near Cenci Vintage, featured previously in this blog, there is an unassuming door marked number 6 and signed The Clockworks. The converted Victorian industrial building, with on-trend grey paintwork, could be mistaken for the offices of an architect’s practice or media company. Instead, behind the entrance door there lies a nationally unique clock collection and a state-of-the-art clock and watch repair workshop. Visitors and customers are welcome by appointment. 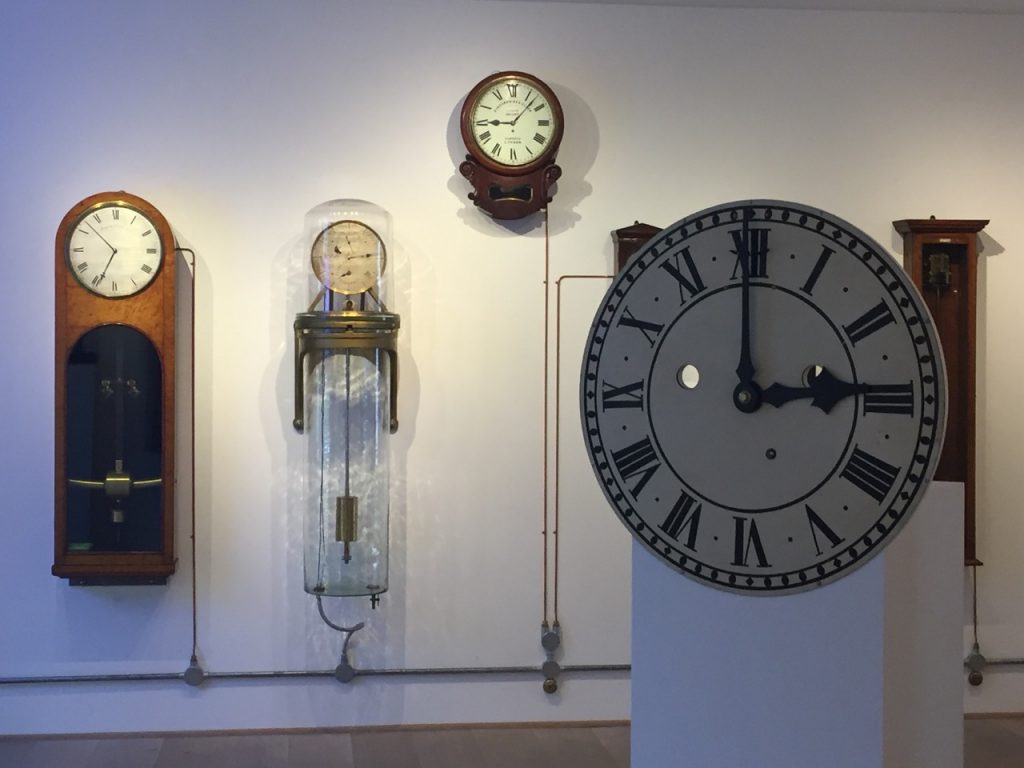 Entering by buzzer, our Intrepid FEAST reporter walked into a meticulously designed open-plan interior. It’s a large, atmospheric space, carefully zoned to reflect the different functions of the organisation: museum collection, library, workshop and charity. The clocks, dating from 1840, are an immediate visual pull and it’s hard not to be mesmerised by the rhythmic ticking and clicking of the timepieces. Behind a raised counter, in the corner, is the workshop domain of the freelance conservators. This area contains the paraphernalia of clock and watch repairing: a metal and wood lathe, brazing hearth for soldiering, milling machine with 5 microns accuracy (1000th of a mm!), a parts cleaning zone and a central desk with the most recent repair project carefully laid out. 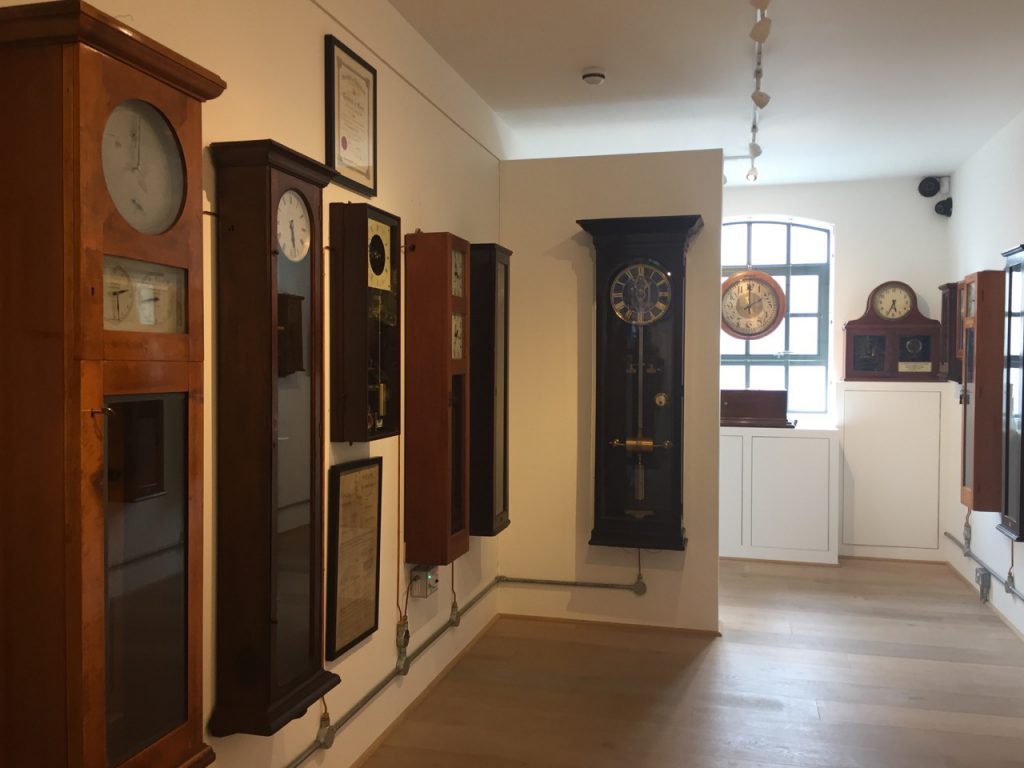 So how has this incredible collection ended up in West Norwood? Well, The Clockworks are the brainchild of Dr James Nye and reflect a lifelong passion for horology (and within that field, the even more niche area of electric clocks). James’s interest developed as a schoolboy when he was given responsibility for looking after his school’s clock system. He explains: “Electric clocks enable the distribution of time at a distance, allowing you to have the same time in different places. They tend to be institutional.” James first began collecting clocks in the late 1970s. By the time he moved to West Norwood with his wife and children, he needed to create a purpose-built space to accommodate what had become a substantial personal collection. Initially he refurbished a derelict house in Chestnut Road in 2001, creating a family home with a large portion of the ground floor hived off for the clocks. Visitors accessed the collection via the family’s front door. Even with this arrangement, a large proportion of the clocks had to be kept in storage. Back then, when a private collector died, their collection was invariably sold off and dispersed. Aware of this, James harboured the ambition to create a dedicated premises open to the public. It was on the backburner for a long time. But in 2012 he stumbled across the opportunity he was looking for via a neighbour who worked in property development. He was able to buy the ground floor of the current premises in Nettlefold Place. At that time, it was a shell being redeveloped into flats and it became a labour of love to transform it into The Clockworks. The low point? “Waiting 7 months to get a gas connection.” 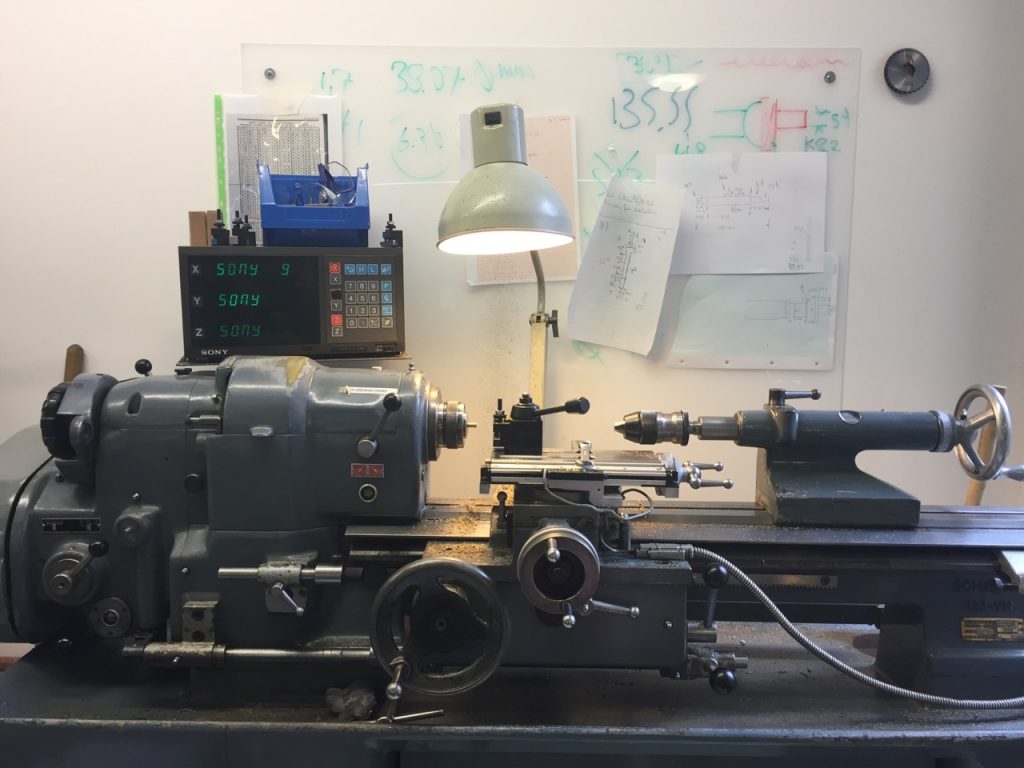 As James needed staff to maintain the clocks, it was logical to construct a workshop area. This also met a need in the horology community. Talented graduates were emerging from conservation courses with amazing skills, but they were struggling to establish a workshop due to a lack of capital. James had the idea of offering bench space on a freelance basis with an agreement to work some days on the collection. It is how he was introduced to Johan ten Hoeve, a second generation Dutch clockmaker. Johan had recently finished training at West Dean College with the accolade of a renowned horology project under his belt. (He had created a replica of a 1676 clock made for the Royal Observatory, Greenwich, that had been installed in the space built for the original.) Johan became involved in the development of the Clockworks and is now Conservator-in-Residence. This brought James on to one of the highpoint of The Clockworks to date… In 2014, Johan was approached by the Kunozan-Toshogu Shrine in Japan to conserve a 16th-century clock that had been gifted to the Shogun in 1611 by the Viceroy of New Spain. Johan spent an initial 8-day trip in an office at the shrine, working at a big desk with a Japanese flag behind it, with the constant company of his hosts, where he cleaned the original clock, took photos and made drawings. The shrine authorities had bought everything they could from his tool kit shopping list. Next, Johan created a working replica of the internal movement so it could be displayed by the clock for visitors to see. This part of the project was done in West Norwood and was finally completed in September 2015. Johan flew back to Japan with his replica to attend the huge publicity launch. So, a high prestige project in the world of clocks and it took place in West Norwood! 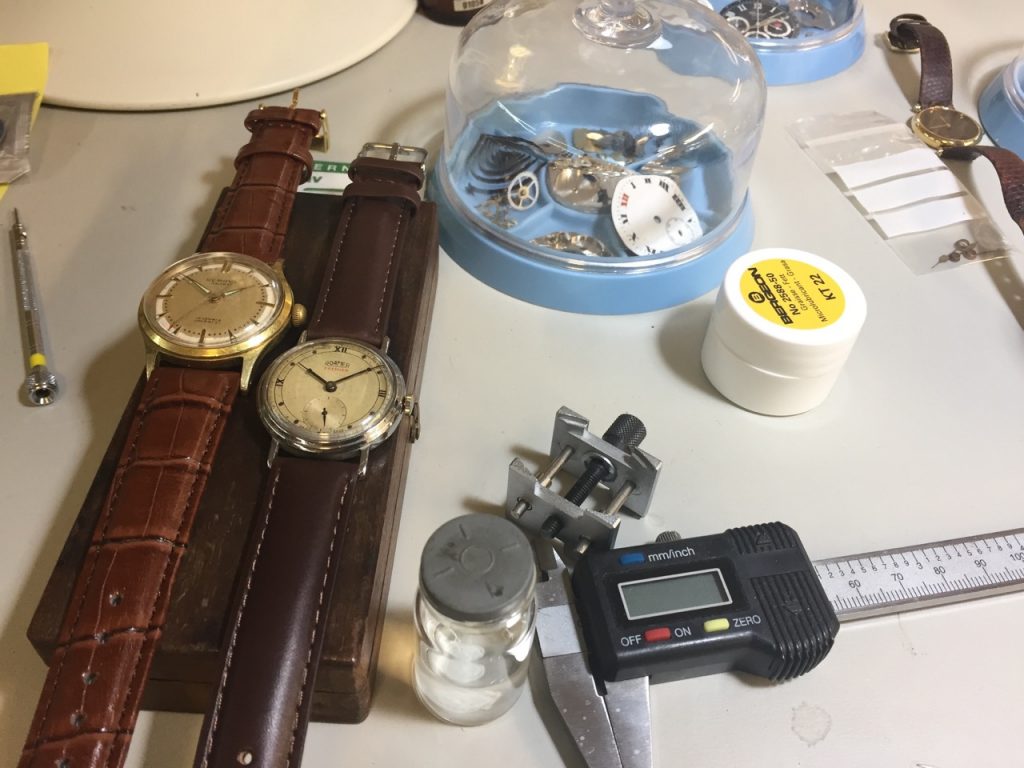 Given its quiet profile locally, it’s easy to assume nobody knows about the collection, but one look at the visitors’ book reveals a steady stream of guests – not all niche electric clock enthusiasts. James estimates they have about 1000 visitors a year, mostly as tour groups, who are treated to an informed guided tour of the collection. Secret London Walks have made about 8 separate visits because the trip is so over subscribed. Then there has been friends of the V&A, National Trust membership tours, and the London Explorers Group to name but a few. Of course there are clock aficionados, including specialists from overseas. Smiths of Derby, clockmakers since 1856, have made staff trips – presumably thrilled to see the historic Smiths clocks on display. And local families with older children have visited during the school holidays. Since 2014, the Clockworks have also been taking part in the annual London Open House, normally opening on the same day as the cemetery and South London Theatre. If you are a film buff, watch out for screenings in the space during the Free Film Festival. 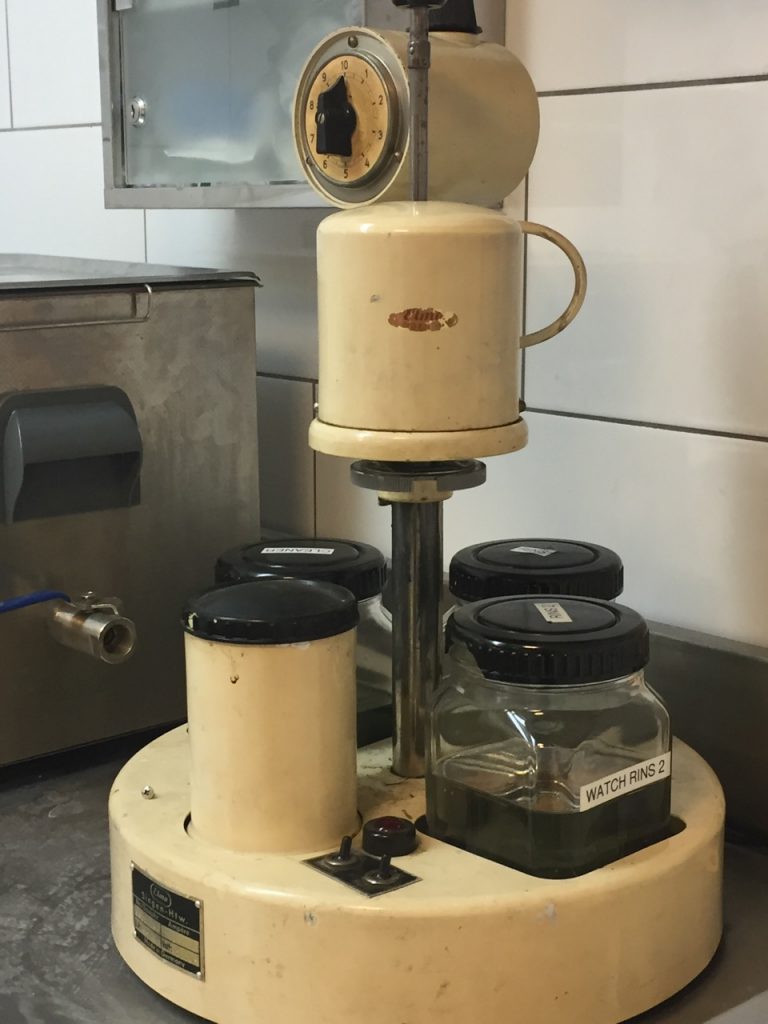 More recently, The Clockworks gained higher profile in the area when James was involved in the £35,000 fundraising campaign to repair St Luke’s tower clock. James comments: “It is a nationally significant clock made in 1827 by the famous clockmaker Benjamin Lewis Vulliamy” (who at the time was clockmaker to George IV). The clock hadn’t been working for about 10 years, permanently stuck at 12 o’clock. In May 2016, with the money raised, the clock was restored by the Cumbria Clock Company. So now the people of West Norwood have no excuse for being late! 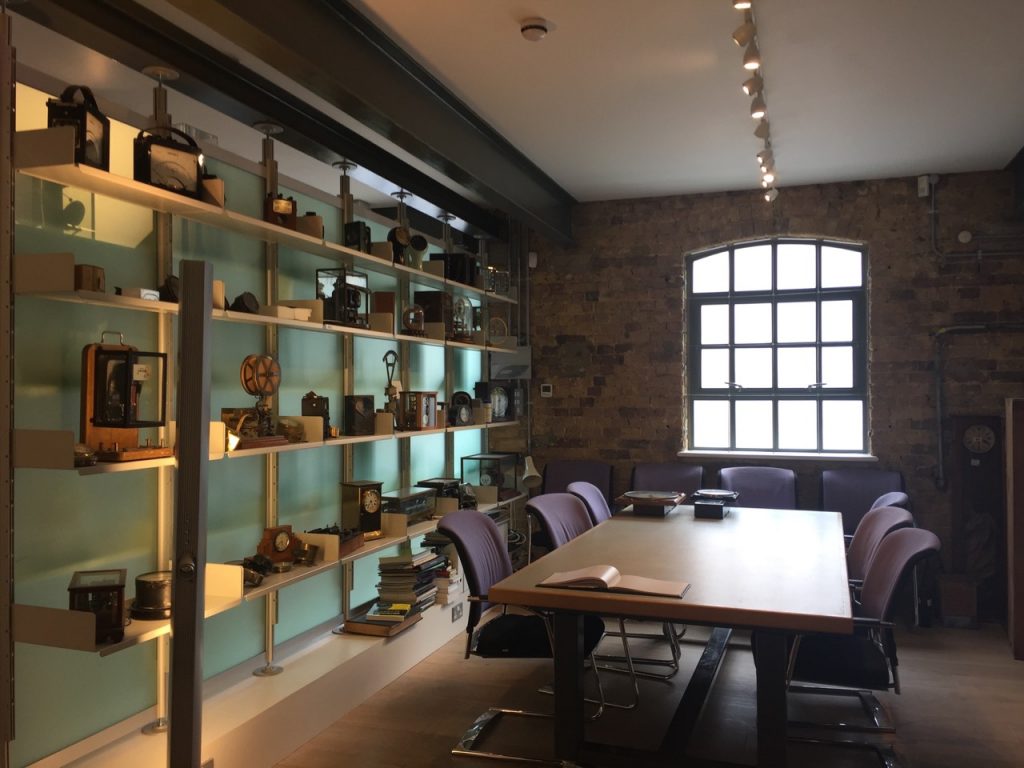 And how about the workshop? Well, it is busy, with more work than they can fulfil. Many customers are local people, often private individuals with heirloom clocks, mainly mechanical, that have ceased to work. The conservators develop their own clientele based on their expertise. Johan, not surprisingly, specialises in clocks and often does site visits. They tend to generate business word of mouth. Our reporter talked to James Harris, who specialises in watches. He graduated from Birmingham City University with a BA in horology and has worked for Omega. A lot of the watches James Harris repairs are vintage; some are antique. He explains: “Vintage watches are very fashionable at present – you can get a brand such as Omega for a few hundred rather than the new price which can be £1000.” 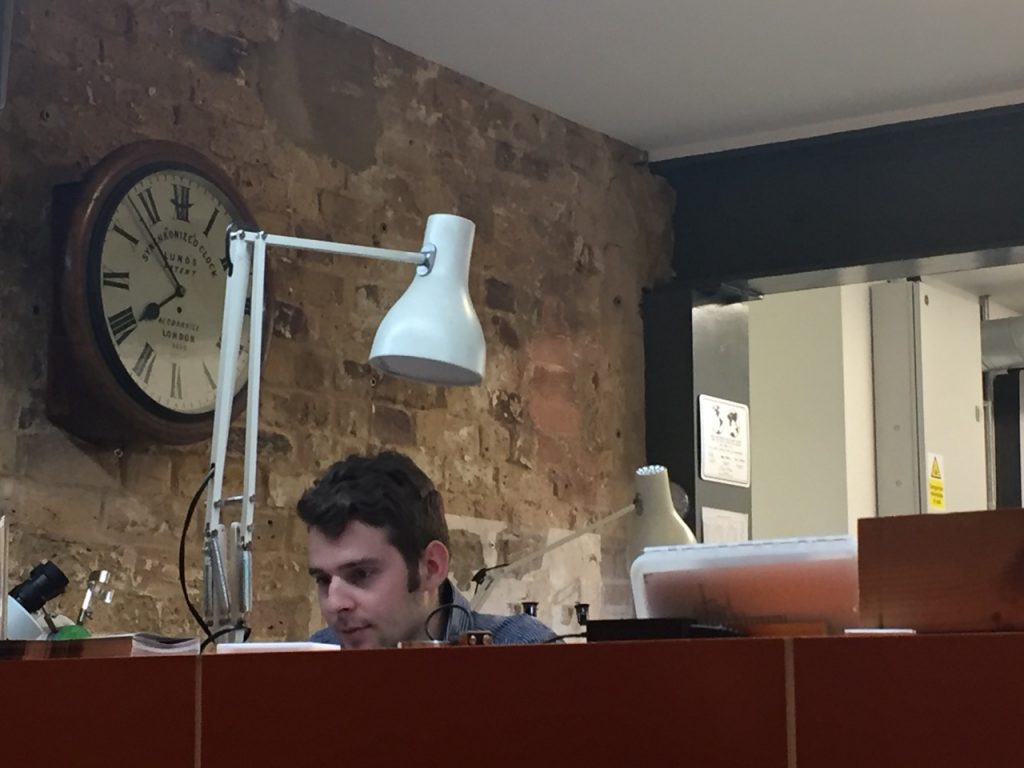 Then it was time for the tour of the collection given by conservator James Harris – and it was truly fascinating. It was hard not to appreciate the engineering or be dazzled by the ideas behind measuring time and distributing time in factories, on ships, to the top of church towers. 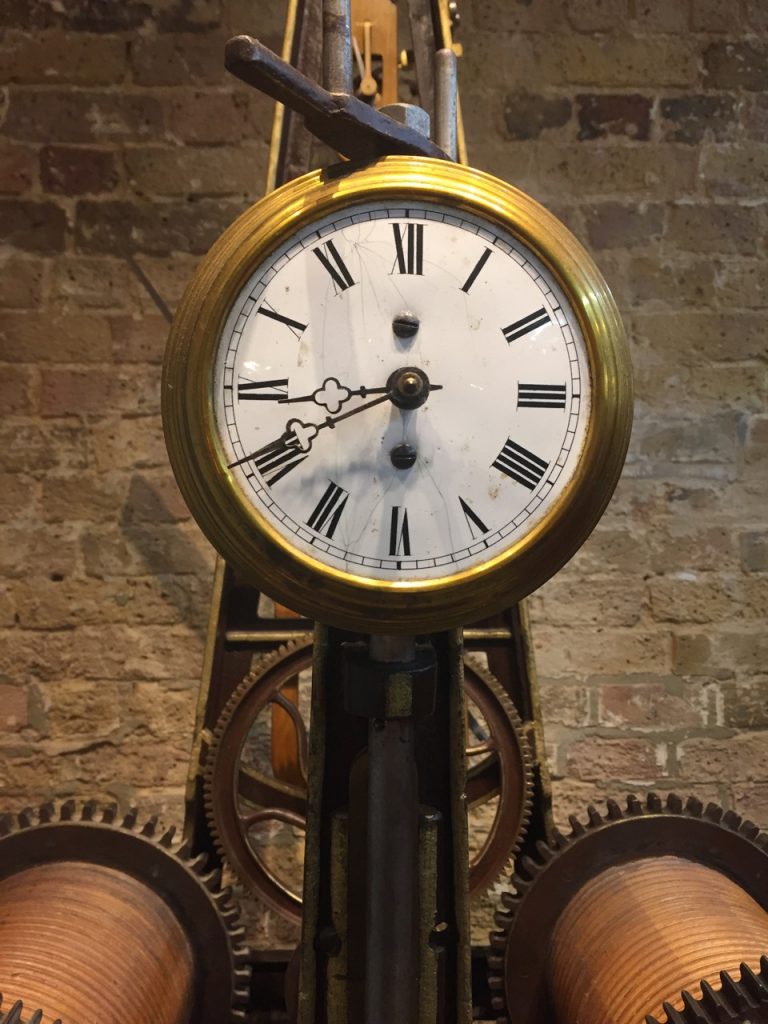 What a treasure nestling in West Norwood! It’s well worth booking a visit, and if you have an old clock or watch to repair, there is a team of incredible experts on your doorstep.