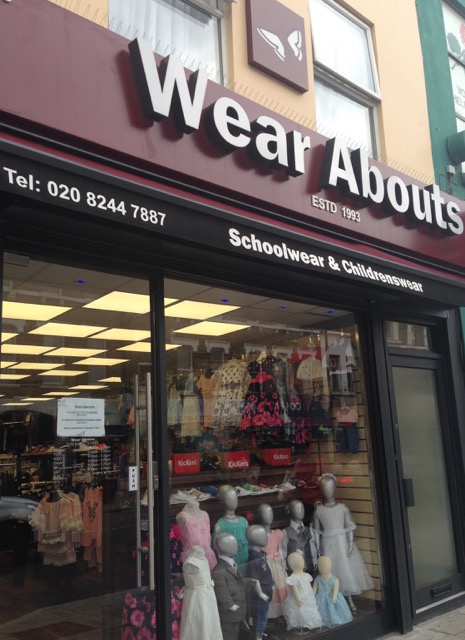 Introducing Wear Abouts, a family business selling children’s fashion and school wear in West Norwood’s high street. The owner Bashir and his son Yusuf warmly greeted our intrepid FEAST reporter and offered a tour of the premises. Towards the back of the shop, you can see an open stockroom with shelves to the ceiling stacked high with clothing and shoeboxes. Out of sight, beyond this, it’s like stepping into the TARDIS – there’s an area consisting of a tall room crammed full of carefully labelled items, a small kitchen and, overhead, more storage space. Bashir explains this used to be the yard but as the business grew he converted it, digging out the rubble over a year, because it wasn’t possible to use heavy machinery. 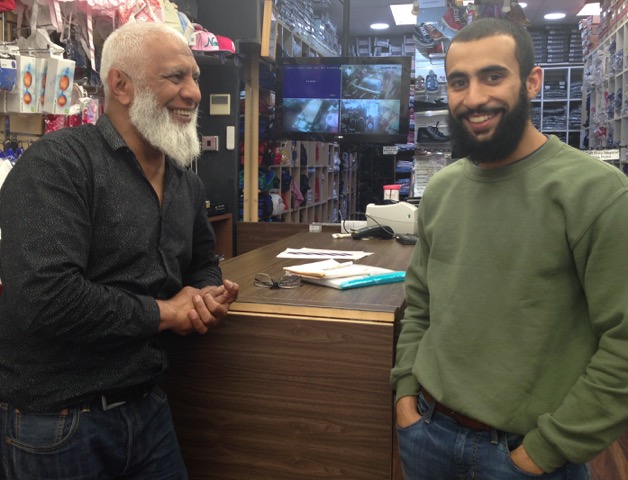 So how did Bashir come into this line of business? Simply, he was compelled by the need to earn a living. Back then he was a newly married man with children on the way. His brother was already running a children’s clothes shop in Sydenham (this has since been sold and still trades, but is not linked). He smiles broadly – West Norwood looked busy and didn’t have a children’s clothing shop. So he took on the current premises in August 1993, initially selling fashion wear for children aged 0 to 14. Bashir remembers his dad giving some sound advice that he has grown to appreciate as the years have passed – “Price your stock as if you are competing with three others locally. Then, if you do get competition later, you will be lean enough to withstand it.”

The late 1990s was a pivotal moment for the business. Elm Wood primary approached Wear Abouts to see if they could produce sweatshirts bearing the school logo. Eventually they were appointed the official uniform supplier. Kingswood primary was next, then St Julians. Fast forward to today – Wear Abouts supplies the uniform for an awe-inspiring 25 schools. This includes a school in Southend and one in Nigeria! Bashir and family have so much expertise as a uniform supplier, they are sometimes involved in uniform design. Although Yusuf points out: that does involve politely steering the school away from over ambitious ideas, such as introducing polo T-shirts with ties! 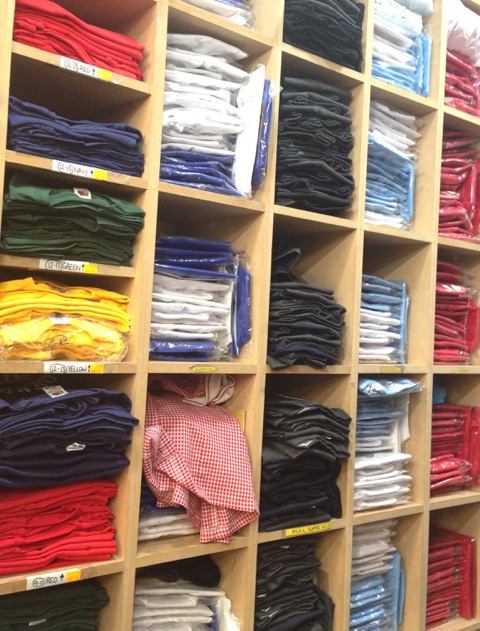 If you were to stroll past the shop at the end of August, you would see what has become a feature in the life cycle of the high street: a long queue of parents on the pavement clutching uniform lists, with children of various ages in tow. Bashir laughs, these days they are well rehearsed at managing the back-to-school rush.

At the end of July they overhaul the shop interior, starting with a Mad Sale to clear the fashion wear and the remaining stock is neatly stored away to make room for school wear. This transformation takes about a week and a half, with the shop remaining open throughout. Bashir hires a team of up to 15 staff for the last two weeks of August – often friends and family members are drafted in. With all hands on deck, staff are given dedicated roles to keep down customer waiting times. There are ‘folders’ who solely package up the purchases and shop assistants are assigned per customer to give one-to-one advice. Customers are actually invited to stand in the till queue as soon as they enter the shop. By the time they are near the front, the aim is to have sourced all the items on their list. If need be, Bashir’s wife Munira will sew the school badge on a newly purchased blazer. There is also a door man, jokingly referred to as ‘the bouncer’, monitoring the crowd to prevent total mayhem breaking out (any parent reading this will appreciate what a bun fight uniform buying can become). In fact, Bashir recalls and grins, in the chaos one year a woman left behind her baby! 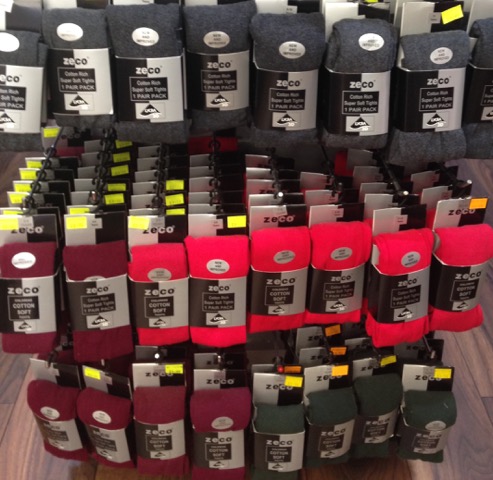 Come the first week of October, when all the uniform sales have died down, they transform the shop back to showcasing fashion wear (the uniform is folded away and kept in stock). Its clearly a mammoth task, like running two shops in one space. It dawned on our FEAST reporter that this sometimes coincides with family fasting for Ramadan – making the effort all the more Herculean. 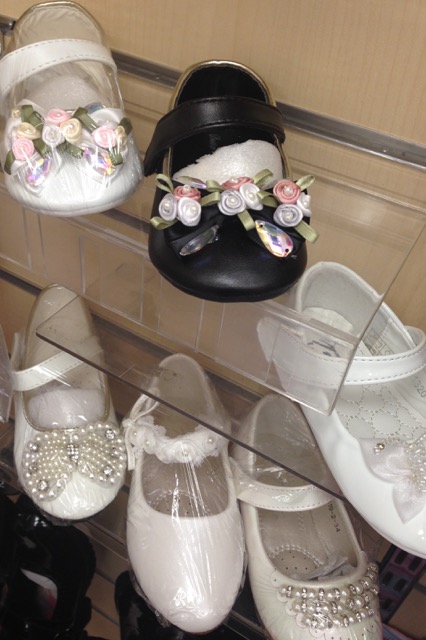 Moving on to the fashion wear… There is an impressive range of affordable special occasion clothing, including smart suits and dresses for weddings, christenings, and church going. Surprisingly, there’s also a big selection of Kickers shoes, one of the shop’s most popular items. And Wear Abouts have provided work clothing to other West Norwood businesses – for example, polo T-shirts with a shop logo for the Baron Polish Deli. 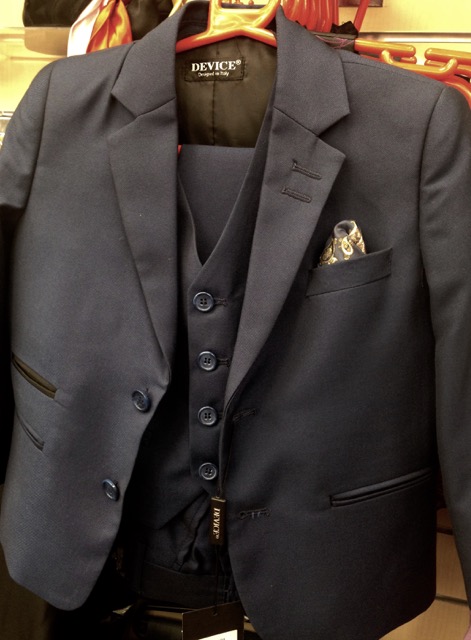 Any highs and lows over the years? Bashir recalls the time when they were asked to sort out a new uniform for two affiliated schools in the last week of July. Even with such short notice, they managed to kit out each school in time for the start of the academic year. Bashir smiles, they received a large bunch of flowers in appreciation. The lows – definitely the nightmare of stock becoming unsellable. With a uniform change, in one fell swoop their stock is out of date. No parent in their right mind wants uniform that is being phased out. It’s a big loss of money for the shop. In that situation, Bashir has loaded up a van and donated the whole lot to the Disaster Emergency Committee.

So what does the future hold for Wear Abouts? They’ve recently renovated the shop and they are working to create a website offering mail order – a big task. Yusuf rolls his eyes and laughs… he has started photographing the uniform items and they will trial with a few schools first to get the system running smoothly. Given they sell about 10 styles and fit of school trousers (slim fit, sturdy fit, elasticated waist, to name but a few), you can imagine how time consuming it will be to catalogue each uniform item. Bashir adds that they are firmly committed to West Norwood and feel part of the community.

And what do Wear Abouts pride themselves on? The answer comes as no surprise, given the way Bashir and Yusuf had serviced customers’ requests during the interview. But Bashir was reticent. “Well we are chatty and friendly people and I suppose that feeds into our customer service”. You only have to read the Google Reviews (overall rating 5 stars) for confirmation. And Wear Abouts have been serving West Norwood for many years, so some customers who remember trying on uniform in the shop are now bringing in their children. Bashir says they also like to give good advice. “Customers are a bit surprised when I’ve said a shoe that their child is in love with and is insisting is comfortable, just isn’t big enough – even if I haven’t got the next size in. I want customers to be satisfied.”

Which is exactly why FEAST loves shopping local…