Insider’s Guide to… The Electric Cafe

Feast season is in full swing again. And so our reporter is back on the streets of West Norwood getting the inside track on local traders.Presenting The Electric Cafe, a West Norwood institution with a reputation that punches way beyond the area…

This renowned eatery sits modestly in a parade of shops on Norwood Road opposite Access Self Storage, around the invisible boundary where West Norwood morphs into Tulse Hill and vice versa. The café’s lace curtains hint at the interior. Pushing open the door, you are greeted by a space that is a throwback to another era and exudes an authentic charm. It’s hard to pinpoint which era in time but there are spatterings of 1940s and ‘50s mingled with 1970s… enough of a period vibe to give the space some serious soul. Which is of course part of its appeal… that and the food! 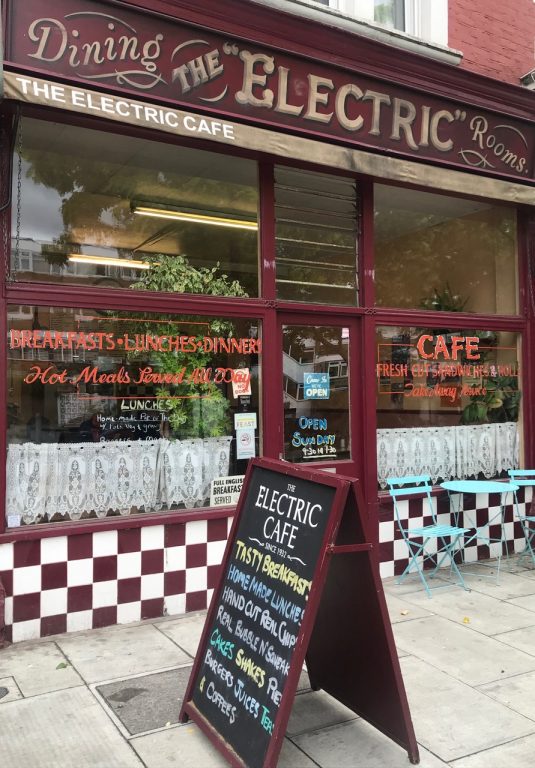 Owners Stavros and his mum, Theodora, confirm the café hasn’t changed much over the years. Stavros explains: his mum and dad took it over in 1978 and it has been in the family ever since – a grand 41 years. In fact they lived above the café for 21 of those years: “I literally grew up here,” Stavros smiles wryly. And he is one of five siblings – all his brothers and sisters have been involved in the business at some stage.

But, the Electric’s roots as a café go back even further – possibly to when the parade was built around 1905. There is even a photo on the wall from 1932 when it was known as the Electric Dining Rooms; a time when the whole parade of shops was called the Electric Parade. Stavros believes the name originates from when there was a former tram depot opposite (now the current Access Self Storage, which if you look closely does resemble a transport depot!) But maybe the name comes from the fact the shops were amongst the first to get electricity in West Norwood? 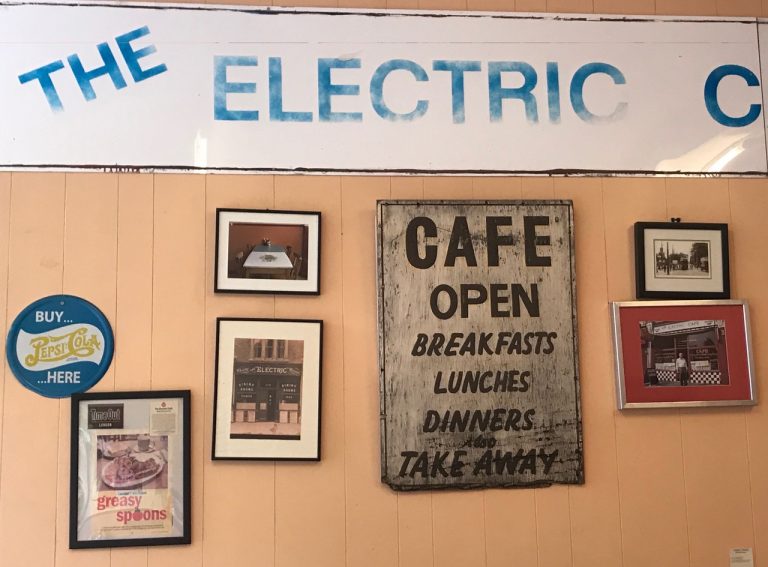 So how did Stavros’s parents end up running the café? He explains that his mum and dad, both from Cyprus, met in 1972. His dad arrived in the UK in 1963 and turned his hand to many different jobs to make a living: electrician, running an ice cream van… opening a café in Deptford, then running a café in Brixton and, when the lease expired on that, they took on the Electric Cafe.

And what is so unique about the place aside from the heritage aura? Well the food is the big draw. Deservedly renowned for its full English breakfast (there’s a Veggie option too) and steaming mugs of tea, the menu also boasts roast dinners. Stavros explains they cook from scratch (no frozen chips etc) and take pride in the food they serve. And more to the point the meals are reasonably priced. It’s no surprise that the breakfast is the most popular menu item. However, the home-made coconut cake has a loyal following and there is home-made apple and cherry pie. Also, at Christmas, you can try a traditional turkey dinner with all the trimmings. 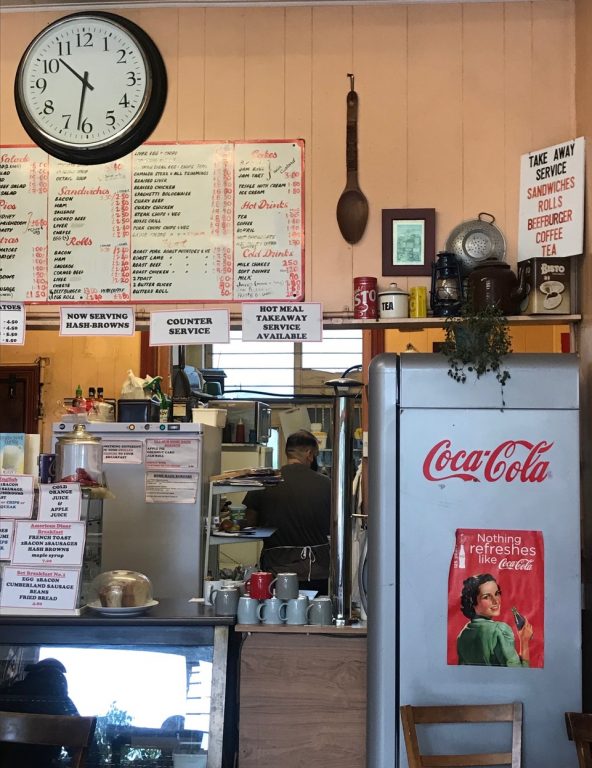 The café, true to its type, opens at 7.30am to receive the first wave of customers, invariably builders and those off to work early. Custom ebbs and flows over the mid-week day. Later in the day the café is frequented by people working from home who are having a break, and then there are school kids coming by for bacon rolls. But the week time trade is less busy than in the past. There has been a big shift in trade to the weekends. About eight years ago the NatWest bank nearby closed and that meant a huge loss of trade. People would come to the bank, run their errands and then pop in to eat. There was also a Probation Office, which closed about seven years ago, and the staff and people using the service came to eat. Stavros recalls a lot of people doing Community Service would pick up a packed lunch before the mini bus took them to work. Now the weekend is the busy period where the café is full of families having breakfast or lunch and young people after a night out. Stavros comments “It’s a really eclectic customer base”. Most are longstanding regulars who often order the same meal. 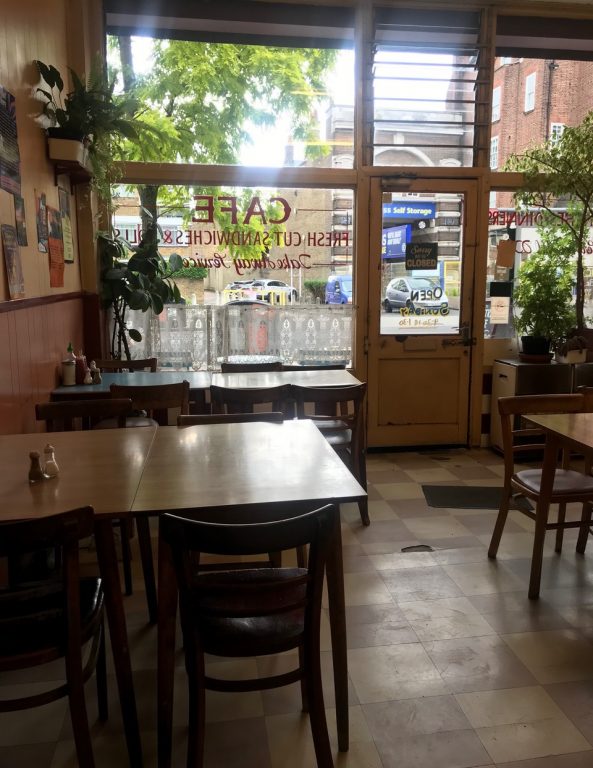 Any low points to running the business? Stavros contemplates, “Oh the break ins… we’ve had a fair few”. He recalls one that happened years ago when their antique till got stolen. His dad went to Crystal Palace to buy a new one and stumbled across the stolen till in an antique shop. But because he couldn’t prove to the police and owner it was his till, he ended up buying it back! 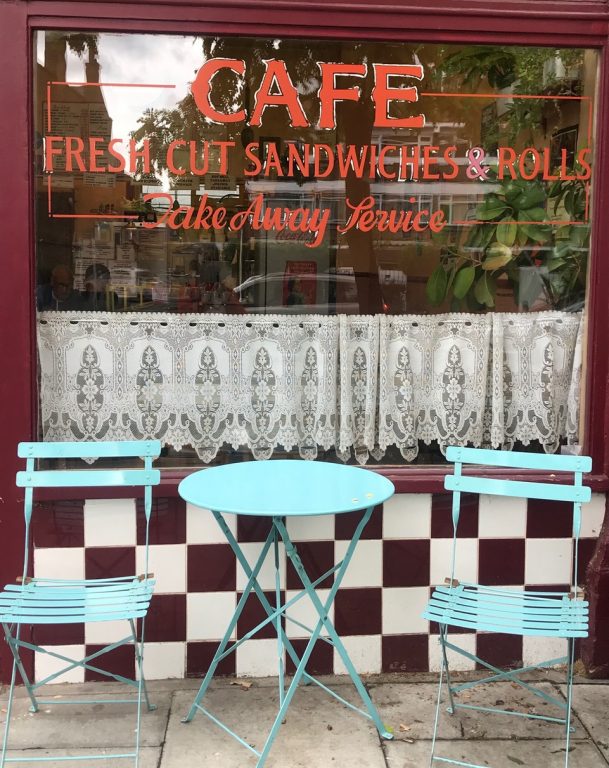 And the high points? Stavros answers immediately “Having our food recognised”. A few years ago Time Out wrote a piece where the café was listed in the Top 10 Greasy Spoons in London. Then last year Stavros stumbled across the fact they were listed in Lonely Planet’s Ultimate Eatlist… that’s a global guide to the top 500 eating experiences in the world! How lucky are we to have the Electric Café in our area! 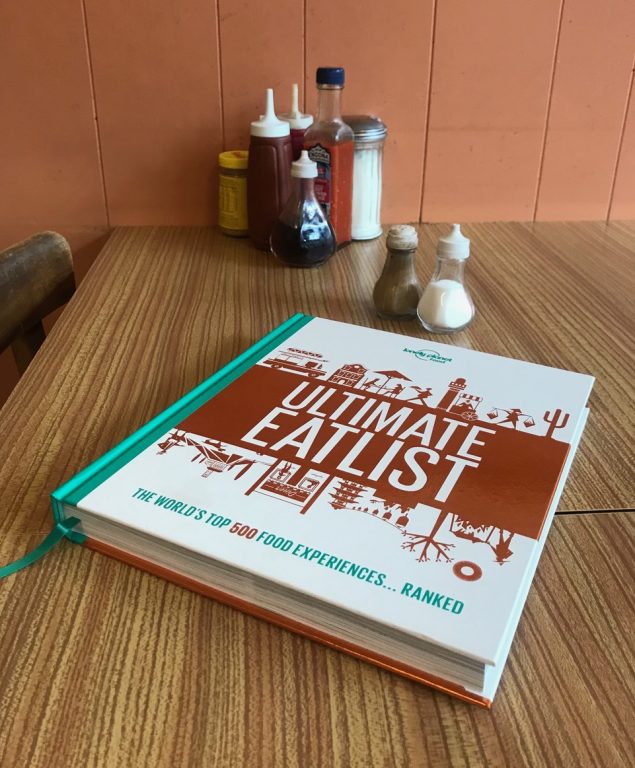 The publicity in Time Out and Lonely Planet has led to a flurry of media attention and Stavros and his mum often host TV crews. The recent Anchor butter advert was filmed in March. In 2017 Julie Walters filmed a tribute documentary to Victoria Woods in the café. Then last November the actress who plays Dr Melfi in The Sopranos was in for the BBC comedy Jerk. The BBC again filmed last year with comedian Romesh Ranganathan. And so the TV crews are becoming part of the fabric and history of the building. In fact on a doorframe near the counter, there are markings signifying the heights of various family members over the years . . . with one notable mark high up on the frame – this represents a particularly tall Art Director!

So if you want to try one of the top 500 food experiences around the world (listed as number 219) . . . you know where to come for the best full English breakfast!