Featuring the Fruit and Veg stall, which straggles a double pitch on the corner of Chestnut Road and Norwood Road. This familiar site to locals has been part of the fabric of the area since Victorian times. Our FEAST reporter chatted with owners Ross and Tina as they served a steady flow of regulars. Ross estimates the stall has been in the family for about 100 years. His mum, Linda, officially retired after 40 years but still doing weekly stints, has kept many of the yearly trading licences. 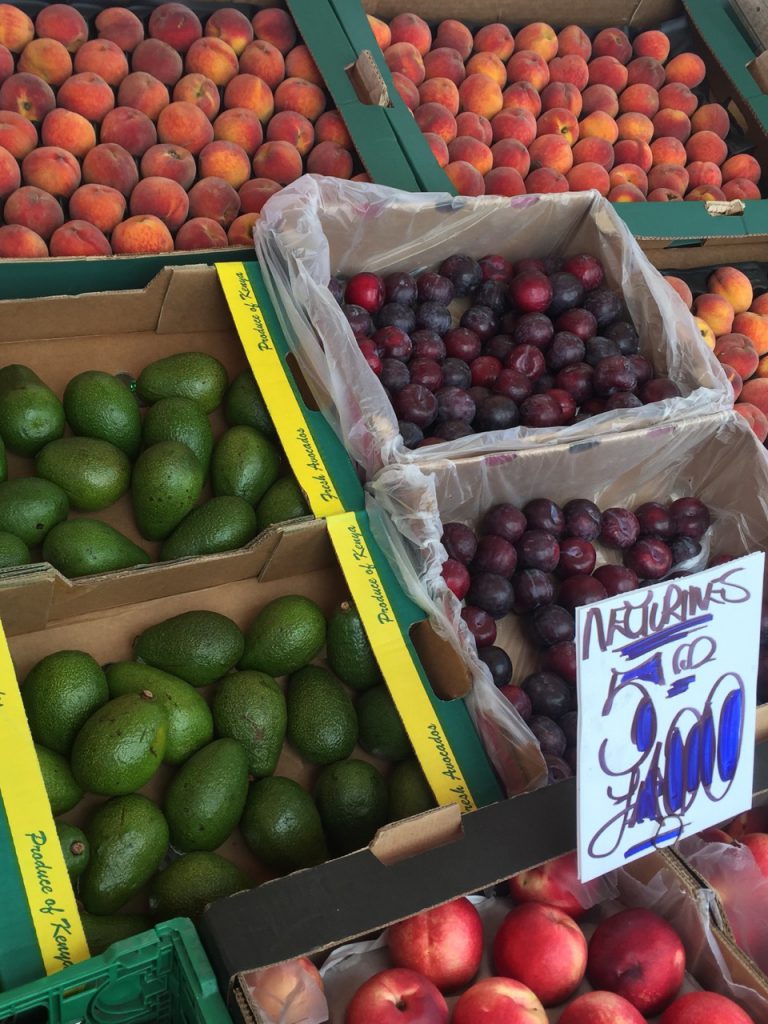 The history is sketchy but colourful. For a while, post World War II, the stall was where Floral Hall is, on the site of a bombed-out building next to the Woolworths (now Sainsburys). You really couldn’t make up how the family gained today’s prime spot – even Ross thought it was myth. The story goes that his granddad, aka Jimmy the gambler, won the pitch. The details are vague, but Linda, who married into the business, thinks it was won from a flower stall owner called Johnny in a game of dominoes. 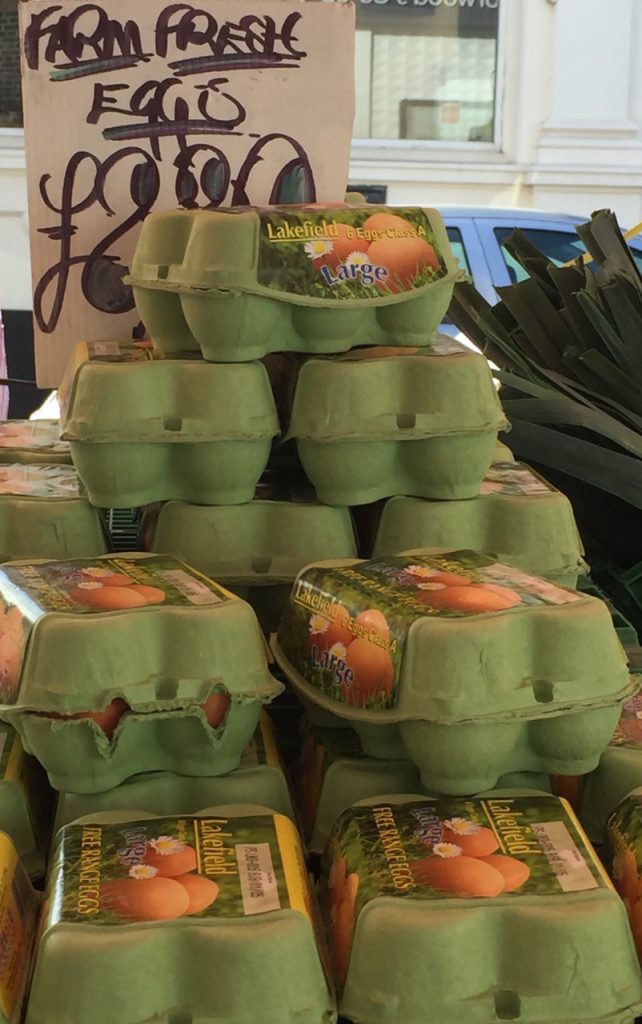 The stall is also pretty environmentally friendly when it comes to packaging. Scanning the produce on show, only a small percentage is wrapped in plastic. Customers bring their own bags, although the ubiquitous plastic ones are available, just in case. The packaging is down to the producers. Ross points out the lettuce – it’s because producers are protecting their goods, especially if it is coming from overseas in a chilled fridge. Spanish farmers are the biggest culprits – they often have huge farms and use polythene because they can afford it. Later in summer, when the stall is selling mainly British produce, there is very little packaging. British farmers tend to operate smaller farms and keep overheads low by not using polythene. Ironically, they use packaging only when supplying supermarkets, who insist on it. British farmers even reuse the boxes – cabbages turn up in apple boxes etc.  Ross smiles at how full circle the packaging issue has gone. “When I was a lad, they would save the boxes off the stall because farmers would pay to have them back.” He’d store up all the used boxes and recycle them. It gave him an extra income as a boy. Back then, no one used plastic carrier bags – these were introduced by supermarkets. In fact, the stall used to wrap the fruit and veg in newspaper and customers always brought their own bags. 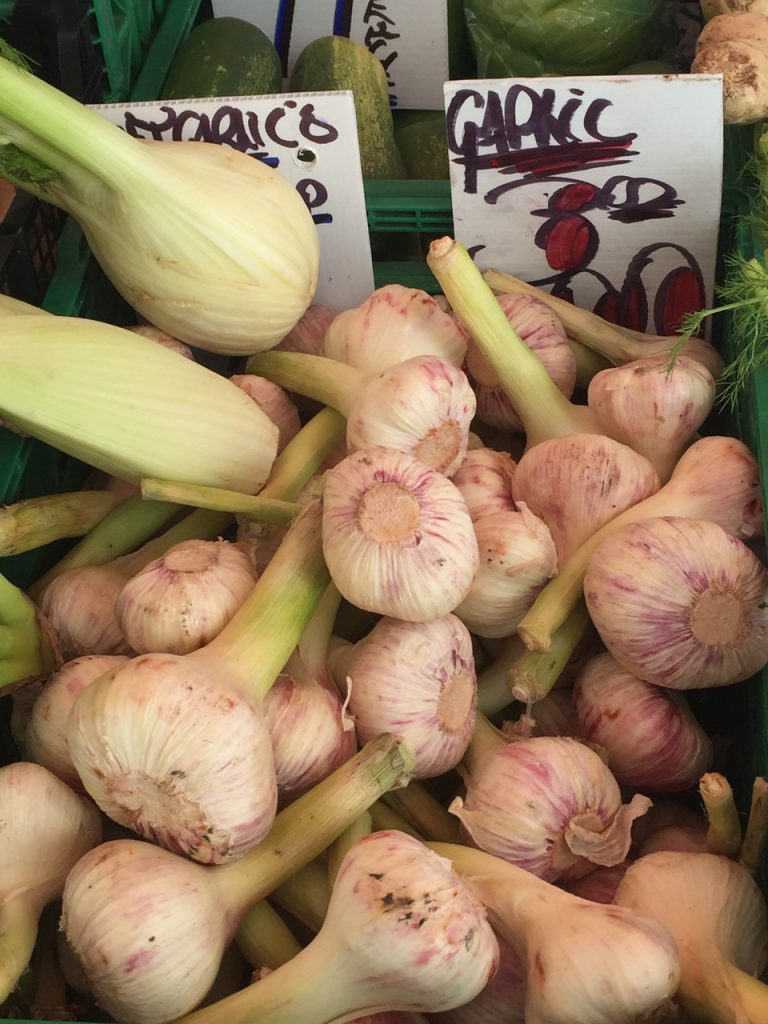 Ross goes to market three or four times a week to buy fresh produce – Spitalfields for more exotic produce and Covent Garden mainly for fruit. It’s a 2.20am start on market day. On other days, he gets up at 3.45am, aiming to be at the stall around 4.45am, as the Co-op lorries are finishing their unloading. It takes a mind-blowing three hours to set up stall, unloading and presenting the fruit and veg to its best. Packing down takes less time and they leave about 3.30pm to get home (now in Kent, although born in this area). For Ross, there’s an unsurprising early bedtime of 7pm. He now takes Sundays off as he needs the rest. 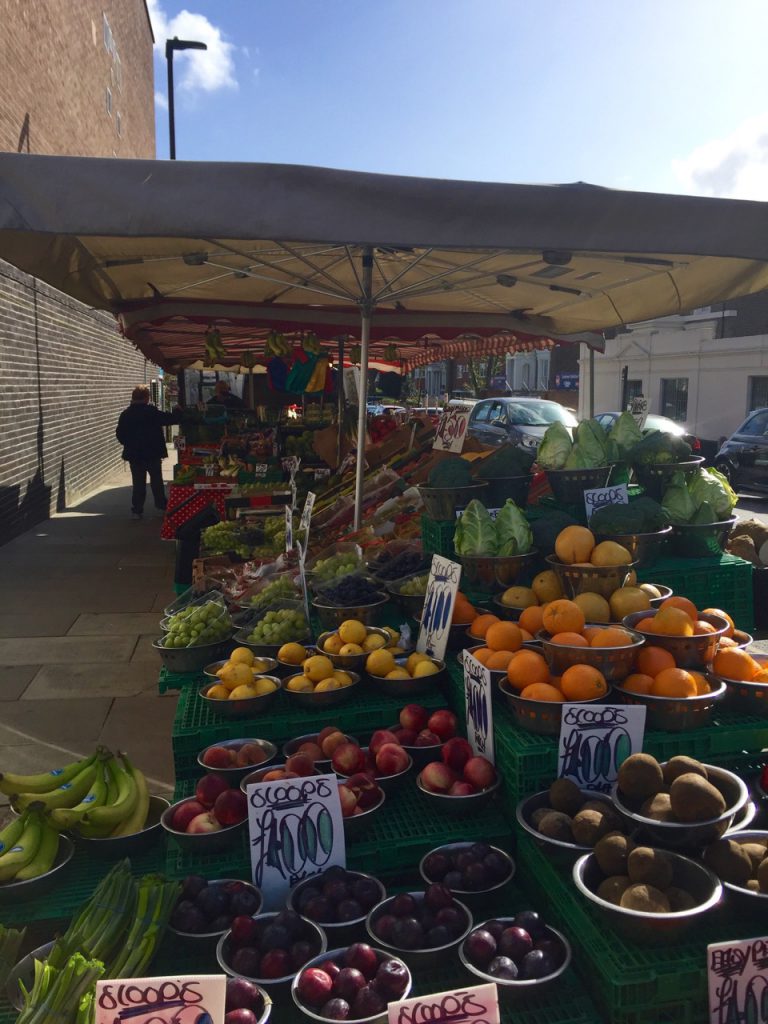 The overheads are a strain… Ross is frustrated with the constant changing of low emissions targets on diesel vans, having invested in a recommended truck only for another model to supersede it. It’s hard for individual traders to bear the cost and he doesn’t even do much mileage. When the stall was kept in the mews yard round the corner, they used to walk it out so they had very a low carbon footprint. But the mews was sold for redevelopment and now they have to drive to their storage location.

So when did Ross start working in green grocery? He looks sheepish, “Well, I started as a 14 year old, as a Saturday boy. I was a bit naughty so got sent to work on my uncle’s stall.” He met Tina, his wife, 38 years ago through working on the stall. Tina was working at the shoe shop Freeman Hardy and Willis (where Kahvah is now) and had to walk past the stall to Barclays to bank the shop’s takings. She grins, “He thought ‘who’s that good looking girl?’” 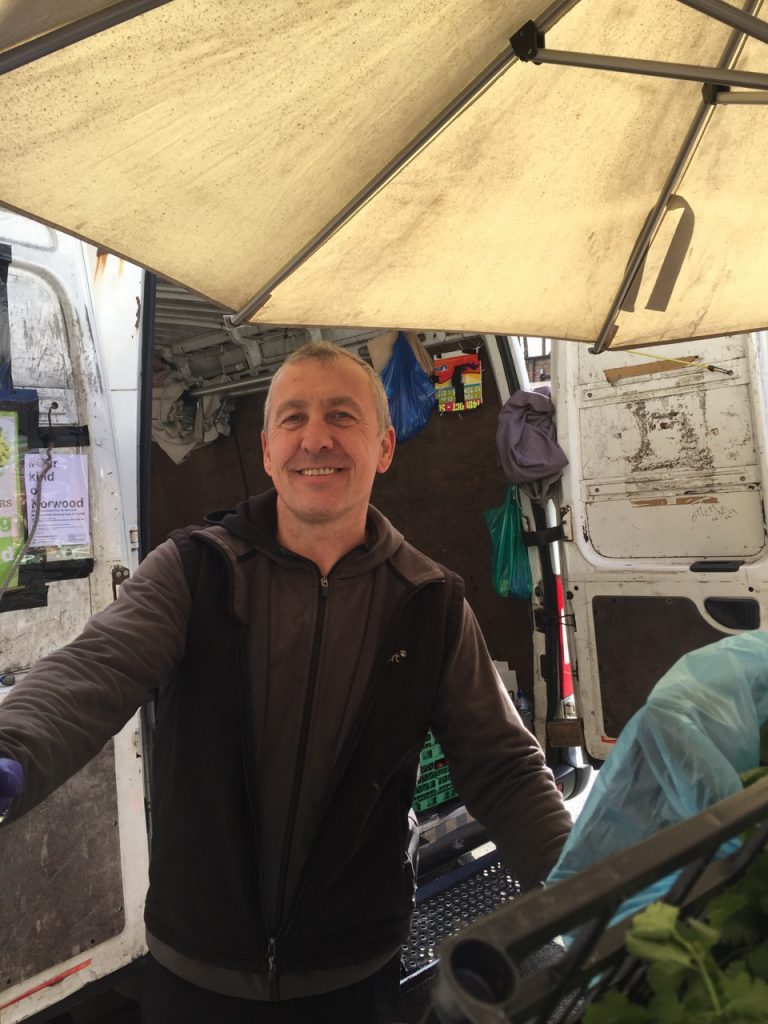 Stood on their corner come rain or shine, Linda, Ross and Tina have witnessed some drama, so much so, they could write a book – the 1980s being the most colourful for crime, when West Norwood was known as “murder mile”. They remember seeing police on the roof of Barclays trying to deal with a bank robbery. There was a Nationwide in a building across the road that got robbed so often that it shut. Then there was the time when Abbey National (where Costa is now) got robbed and the thieves came crashing into the stall as they ran around the corner to escape, triggering a smoke bomb in the money bag. This scattered money over the streets and all hell broke loose with people scrabbling to pick up the notes. Ross laughs, “Even old ladies were managing to bend down low in an attempt to reach the money.” Then there was the time when they noticed a suspicious guy loitering near the current Co-op (at this time it was a Tesco), and the manager got his throat cut in the robbery – luckily, not fatally. They called the police and the robber was caught but was given bail. He used his bail to burn down their stall. Ross shrugs ruefully, “What can you do, you try to do the right thing.” 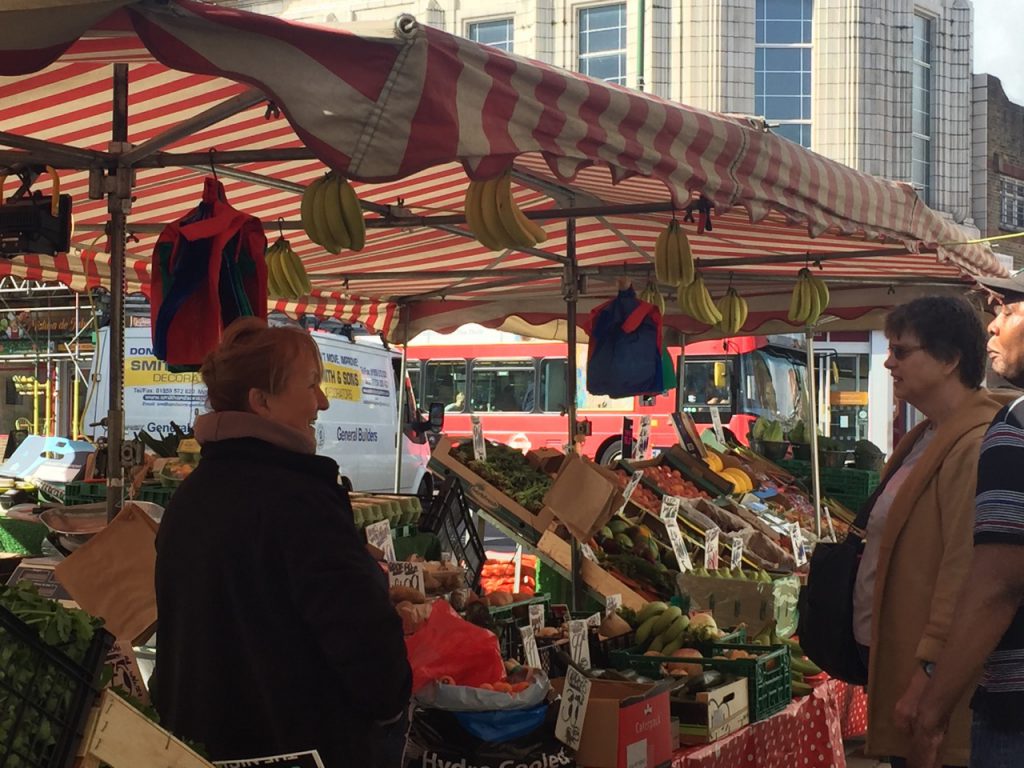 Over the years, Ross has learnt how to judge the stock they need – if it’s a drizzly day, he will buy less. They usually manage to sell the perishables each day and will sell at a lower price near pack-down time if too much is left. If going on holiday, it’s more tricky and he may have to give away stock, giving it to a food drop or try selling at a discount to local restaurants. He also goes with the flow with what is fashionable. There’s a demand for kale and chard at present – veg that people wouldn’t have dreamed of eating before! As a sign of how tastes change, in the 1970s they had a beetroot boiler on the street and people would buy hot beetroot – it was really popular.

They have a solid base of regulars including some famous singers and thespians, but Ross remains tightlipped about who (although he did mention Adele’s mum was a customer!) Some regulars been coming since they were children – one is 90 years old. There was a noticeable amount of chat with customers. The family are well known in area, especially because Linda was born in Dulwich and Ross went to school locally. Ross’s sister Emma runs the hairdressers, Emmys at Salon 382, Norwood Road. It’s these connections locally that mean so much. Sometimes, old school friends will bring Ross a warm lunch, often a West Indian dish, and with that thought, he smiles.

Share
PrevPreviousInsider’s Guide to… Emmaus Lambeth
NextSunday 6 May 2018Next
A free searchable local directory of West Norwood and Tulse Hill based businesses
FIND OUT MORE!
FIND OUT MORE!