Winter rain and cold; but the FEAST team has regrouped to prepare for the year ahead. And so our intrepid reporter is back pounding the streets of West Norwood to meet more local traders.

Presenting; Emmaus Lambeth, a homelessness charity with a cluster of shops along Knights Hill selling a variety of second hand goods. Its not hard to notice Emmaus vans, with their bright green sides and white logo, bustling around the area. But how the charity works is maybe less familiar. Our reporter headed to a large residential building, known as Bobby Vincent House, to meet Glen Ferns, formerly living there and now Fundraising and Communications Officer. This is the beating heart of the Emmaus Lambeth community. Seated on a sofa in the lounge with the waft of cooking from the kitchen, Glen explained the unique ethos behind Emmaus. They tackle homelessness by providing a home and meaningful work for people who have been homeless. Its the work bit that’s crucial; that giving someone a purpose is vital if they are to avoid ending up back on the streets. 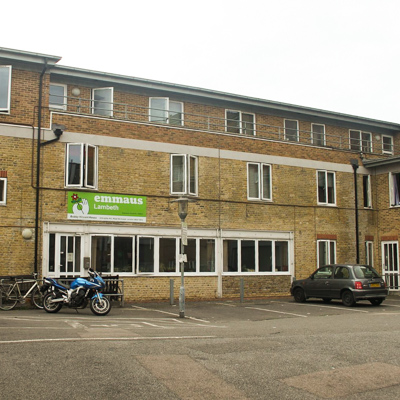 There are currently 29 Emmaus communities in the UK, but each community operates independently. And the goal of a community? To become self sufficient and support itself with revenue generated by its businesses. Emmaus Lambeth does this by selling donated goods. In 2005 it opened two shops, number 9 and 11 Knights Hill. Then two years later Bobby Vincent House was purpose built along with the furniture outlet on the site of an old tramshed. The house has 27 ensuite rooms and is usually full, with a waiting list. There is even a spill over room, where in an emergency they can offer someone shelter. Its a bit like a corridor space but as Glen points out; it is warm and safe and better than being on the street. In return for a bed and food, residents, who are known as companions, help run the local social enterprise. This involves collecting unwanted furniture, white goods and bric a brac, preparing items for resale and serving customers. 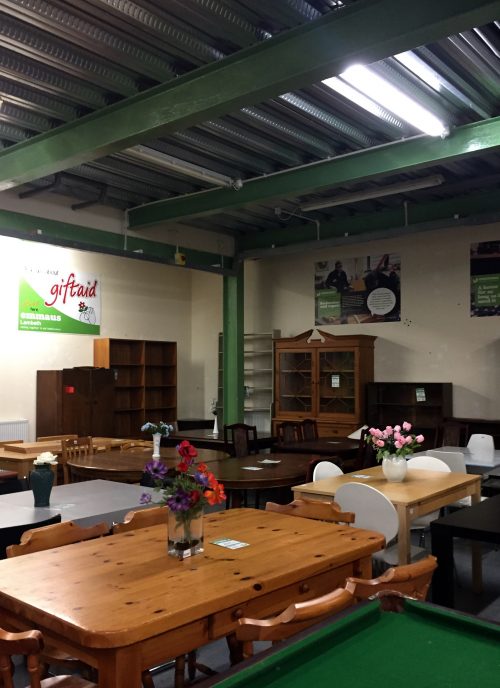 Glen turned to his own personal history to give an example of how life changing the work of the charity is “I was born in Dover, Kent and by the time I was 24 I had been in prison a few times”. He explains he had got in with the wrong crowd, his relationship with his parents had broken down. He eventually ended up rough sleeping in Brighton, before finding a night shelter. YMCA Brighton managed to get a referral to Emmaus.  By this stage of the interview the smells from the kitchen were becoming mouth watering and companions were gathering for their lunch break. Glen continues ” The day I moved in I knew I had a choice – make the most of it or go back to prison”. He spent five years living as a companion in Bobby Vincent House in return for helping in the shops and on the vans. Emmaus arranged for him to do a fundraising internship with another charity. Fast forward to today. Glen lives in Camberwell and is part of the Emmaus Lambeth staff team working full time in his role. In this capacity he often gives talks about his own journey. 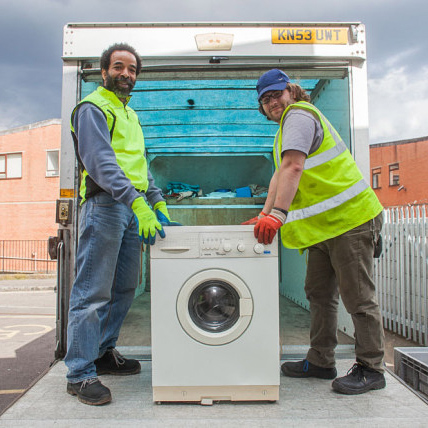 It was time to leave the warmth of the lounge for a whistle stop tour. On the way to the nearby furniture warehouse (aka outlet), there was one of the all so familiar vans. Five vans collect furniture from across South East London and Surrey (Emmaus Lambeth is responsible for Surrey outlets too). Glen mentions on average the vans go out to four jobs in the morning and three in the afternoon. So what kind of items do Emmaus accept? Well the whole range really. Number 9 Knights Hill focuses on electrical goods (microwaves, lights, washing machines, computer monitors). And number 11 concentrates on preloved clothes (and is currently displaying a fine collection of stilettos in the window). Then there is the corner shop next to Maddison’s, nicknamed “lofty” (because it used to be a loft conversion business). This has great window frontage to showcase their higher end homewares. And if it’s general bric a brac you are after, then head to the furniture outlet for a rummage in the ground floor space. Probably unbeknown to most of us West Norwood folk, there is also a Brixton premises. This opened in 2013 on the Angel town estate and is where they provides furniture to families in crisis via Lambeth Council’s Emergency Support Scheme. 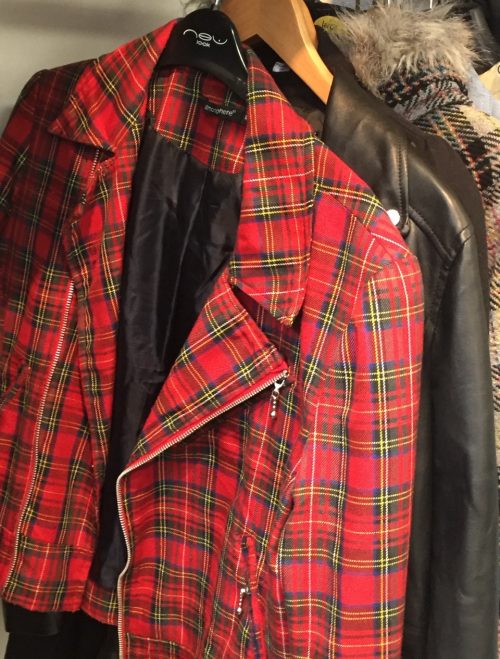 And what state do donations have to be in? Well donated items have to be in reasonable condition with a fire label where relevant and white goods workable – but they do do minor repairs, steam clean upholstery or wash covers. Sometimes they go to a house clearance. This can throw up some unusual donations; the oddest being a mortuary table equipped with drainage hole! The big ticket items, which generate an income to support their work, are the sofas and fridge freezers. And you can book one of the vans to take large goods away for free. 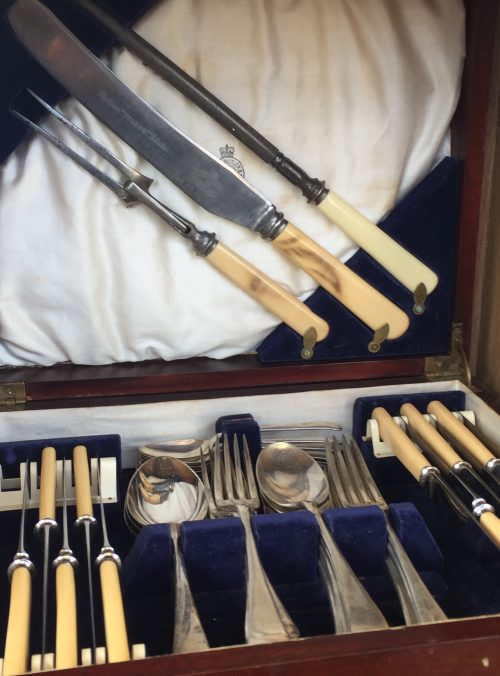 It was nearly time to meet James Hayes, CEO. Back in the residential building, the entrance way has a large slightly incongruous black and white poster of a man in a beret. Glen comments “That’s our founder, Abbé Pierre. He set up the first Emmaus community in France”. Abbé Pierre it transpires was a former resistance fighter, MP and French priest, which explains the biblical name, Emmaus (although the organisation is non religious). And on the Emmaus website, it recounts the inspiring origins of the movement; how Abbé Pierre was working to relieve destitution in post war Paris when he was introduced to a homeless man, named Georges, who had tried to commit suicide. 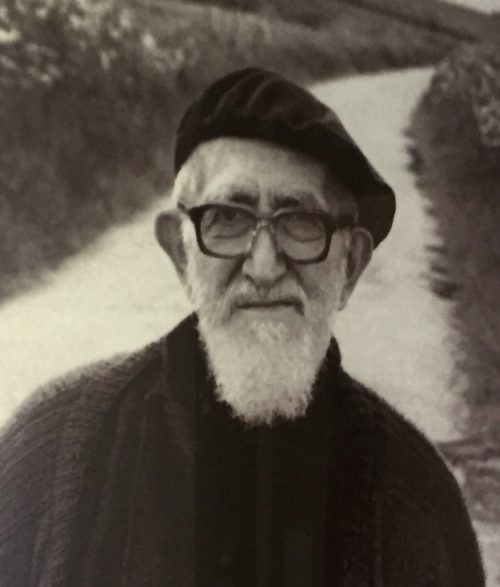 So on to meeting James. James’s office is on an upper floor of the residential building. James joined Emmaus in 2009 with a background in retail banking. He had heard about Emmaus from volunteering with Crisis. His passion for Emmaus is infectious. “The peer support is incredible; the companions really look after one another”. He mentions how the organisation encourages an awareness that there is always someone worse off than you. If you read the life stories on the Emmaus website – then that is a truly humbling statement. James proudly points out that companions often do additional volunteering. Over Christmas 2017 seven companions volunteered at Crisis. The community also piloted a new scheme opening a temporary night shelter in their own premises from December 30th to Jan 9th. James comments how caring the companions were; organising bedding and making food for 10 rough sleepers. It was so successful they plan to do it again this year. James also brings up the topic of meaningful work. “Work is the second question people ask about, after your name, on first meeting you”. He expands, saying that by giving companions the opportunity to build their skills, they gain dignity and self respect which helps them reconnect with family or build new relationships. This is fundamental. He muses “Many people end up at Emmaus because they don’t have a support network”. He believes everyone has a background in something; has skills they can offer. Part of a companion’s stay often involves training – they’ve had people do accountancy, building courses. He laughs, and adds “Even learning to horse ride; anything that promotes self confidence”. And the highs of the his job? Without doubt, when a companion secures employment, even better when its with Emmaus. The lows? He hesitates. Some clearly not to be mentioned. “Its hard when a companion moves on because it doesn’t work out – but the door is always open”. 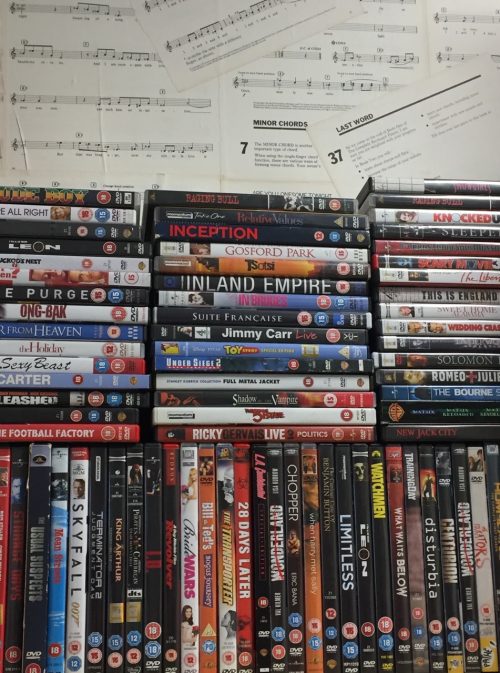 So how is the business side of things going? Well donations are steady. James revealed they are generating an income of £70,000 a month from their shops. Which seems quite incredible – the stock is reasonably priced so there must be a big turnover of goods. Any plans for the future? Well indeed there are and they are mighty exciting. James explains that companions who do get a paid job often can’t find affordable accommodation. An architect is looking at ways to rationalise their premises so they can create three move on units. These units would enable companions to live for up to two years at a reasonable rent whilst getting established.

And on that optimistic note, our reporter left, pondering how amazing it was that second hand goods support such work.